Get on Your High Horse

The positive and therapeutic connection people have with animals is undeniable

Story and Photos by Jennifer Selver

“I’m as tall as dad!” Patrick Magnusson exclaimed. This feeling was different than being in a wheelchair and always looking up to others and them looking down. The sense of being up high gave Patrick, who was born with cerebral palsy, a feeling of immense freedom.

The symptoms of cerebral palsy vary between people, but often include stiff or weak muscles, poor coordination and tremors along with issues regarding vision, hearing, speaking and swallowing. The cause of this abnormal development or damage to the brain is still unknown but typically occurs during pregnancy.

The right side of Patrick’s body is paralyzed, which for many would mean a life of dependency, but therapeutic horse riding since the age of three created an independent path for his future.

Patrick was first involved in the North Okanagan Neurological Association (NONA) for Child Development before horses came into his life. NONA grew from a small incorporated group in 1975, serving about 120 children and families per year, to a successful child development centre in Vernon, British Columbia helping more than 400 children per year now while increasing its staff from eight people to 45.

Dr. Art Sovereign was a pediatrician in Vernon, B.C. during NONA’s initial growth period and played an instrumental role in getting young patients with special needs access to physiotherapy. In his practice and research, Dr. Sovereign realized there were great benefits to therapeutic riding for people with disabilities, be it mental or physical, and felt it was a necessity to have such a resource in the Okanagan. The surrounding area of Vernon offered the space and the access to horses, and became the perfect setting for the program.

After getting Patrick into NONA’s programming, his parents were referred to the North Okanagan Therapeutic Riding Association (NOTRA), a non-profit organization first developed by Dr. Sovereign, his wife Agnes Sovereign and family friend June Osborne – all pillars of the Vernon community. So at the age of three, Patrick was propped up on a horse and has not looked back since.

Dani Goldenthal, NOTRA’s Program Director, says the program started in Vernon in 1984 with 20 clients and today, depending on the sessions offered, can have 70 to 90 participants who range in age from three up to adulthood.

“The riders feel such a sense of joy and independence of being up high and being able to control such a large animal,” Goldenthal says.

Therapeutic Riding received international recognition in 1952 because of a woman in the Helsinki Olympic Games. Lis Hartel, a Danish competitor, won a silver medal in the Grand Prix Dressage – a highly choreographed technique of riding – despite being paralyzed below her knees due to polio.

Polio, medically known as poliomyelitis, is a highly infectious viral disease that mainly affects young children causing fever, fatigue, headache, vomiting and more, as well as paralysis in some cases, which is often permanent. It can only be prevented by immunization as there is no current cure.

Hartel’s Olympic success raised awareness of the many benefits horse riding has for people with disabilities. Since then, therapeutic riding clinics popped up throughout Europe and North America.

Therapeutic riding offers psychological, social, physical and educational benefits (see a list of specific benefits at the end of article) to many people with physical and mental disabilities including cerebral palsy, visual impairments, amputees, obsessive compulsive disorder, autism and spina bifida, just to list a few.

The physical benefits exceed those of a traditional regimen of exercises and stretches with a physiotherapist. Demian Carson, one of NONA’s physiotherapists, explains that a child’s muscles are relaxed for prolonged periods of time when riding a horse, which is a different approach to physiotherapy.

“The rhythmic movement of the horse moving from side to side communicates to the child’s hips, which mimics the body’s natural way of walking.” Carson explains. “There are many studies out there in terms of the Growth Motor Function Measure (GMFM).” GMFM is a clinical evaluation used to measure the changes in the gross motor skills – larger movements like running and jumping – in children with cerebral palsy.

Carson adds that with 18 therapeutic riding sessions, the limits most children’s physical disabilities place on their bodies are decreased, and such things as walking and general body mechanics improve.

Children with paralysis, much like Patrick, have muscles that respond in a spastic motion, contracting their muscles to make their legs come together in a scissor-like-fashion, for example. Sitting on a horse creates a greater stretch of their legs, benefiting the child who is also physically and mentally relaxed on the animal. It would be recommended that this type of therapy program for a person with cerebral palsy continue for his or her whole life as the condition is life-long. 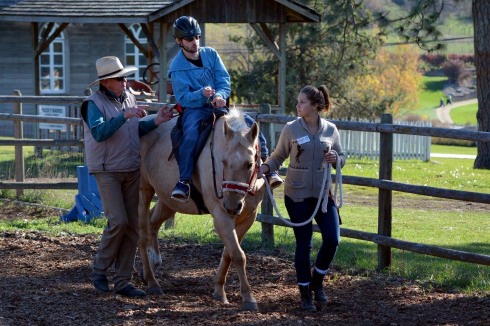 In 1997, Patrick’s family moved from lower mainland, B.C. to Vernon (about a 500 kilometre distance) because the resources and opportunities he needed were less spread out and therefore, easier to access. The resources also served a smaller demographic, which was another plus for his family, too.

“I cried when we came to Vernon because I knew this was going to give Patrick such a great opportunity,” Nancy Magnusson, Patrick’s mother, recalls. “There was going to be the support he needed to live a good life.” From the moment he sat on a horse, she says he loved the movement, sense of freedom and the feeling of going fast.

The bones for a child with cerebral palsy still grow, yet his muscles remain in a constant state of tension, preventing the ligaments from growing as rapidly as the bones. Therefore, surgery is required. Nancy says the doctors believe Patrick had minimal ligament lengthening surgery due to his years of horse riding.

Not only does horse riding aide in muscle stretching, the rider’s core muscles are constantly engaged to maintain balance on the horse, thus improving core strength. This helps in his or her day-to-day life to sit more independently for prolonged periods of time.

“There are also added emotional benefits,” Carson says. “Studies have shown documented proof of children improving on problem solving skills, development of empathy and the ability to relax.”

Today, Patrick is 20 years old and lives with his roommate while maintaining an independent life, with community support.

“He has more a social life than me,” his mother says. Nancy respects Patrick’s independence and they see each other weekly, or talk on the phone regularly, however he is a busy man in a busy world.

He remains a committed rider with the help and support of NONA, taking him to his activities, and has a full life of extraordinary activities from one day hanging out with mayor to taking part in the annual summer parade the next.

For future clients, NOTRA’s therapeutic riding has a crew of four instructors and 50 volunteers. Goldenthal says they’re always looking for new enthusiastic volunteers to lead horses, help riders up on the horses, do grounds maintenance and help with event fundraisers.

Like humans, horses are social creatures with different personalities and temperaments, which creates a great ability to communicate with people. Their response to our emotions offers many people great comfort. “We have up to 15 horses in the program and for most of these horses this is their second career,” Goldenthal says, adding their previous lives include horse shows and working on farms.

Goldenthal says the rewards of working at NOTRA include witnessing the emotional benefits of the riders. It’s gratifying to see a child’s face light up and their smiles create tears of joy in the parents eyes whom have not seen their child smile in a very long time.

Benefits of therapeutic riding as written on the NOTRA website

Social Benefits:
– Interaction and the development of friendships with the volunteers and other riders
– Development of respect and love for animals
– Increased experiences

To have success, you grow from falling down sometimes. That is life. And there is rarely a time that you need to go through the experience alone. You have a community somewhere. Lets huddle up and grow together.

What We’ve Been Up To